Grounds for Health is a non-profit organization, developed in partnership with the coffee industry with the mission of reducing cervical cancer among low-income women. Cervical cancer is a leading cause of death among women in low resource settings, yet it is easily preventable through screening and treatment of precancerous lesions. Worldwide, an estimated 317,000 women will die from cervical cancer in 2015, with this number expected to increase to 443,000 deaths in 2030. Our programs provide cervical cancer prevention services to women in coffee growing communities in Ethiopia, Nicaragua, and Peru.

Because coffee is often cultivated in rural, low-resource settings, few women in coffee growing communities have access to cervical cancer screening and preventive treatment. To address this problem, Grounds for Health works in partnership with health authorities and coffee cooperatives in developing countries to train local doctors, nurses and community health promoters, and coordinate screening and treatment services in communities most affected by cervical cancer. Coffee cooperatives play an important role in the collaboration by ensuring buy-in and participation of community leaders, conducting outreach to coffee growing families, providing transportation for women to access services, and when necessary, providing social and economic support to families affected by cervical cancer. 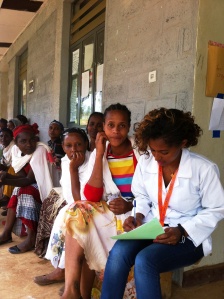 Proposed Use of Funds from JavaJog

In Ethiopia, Grounds for Health is partnering with the Sidama Coffee Farmers Cooperative Union and their primary co-ops in the Sidama zone, as well as the Sidama Zone Health Department and Regional Health Bureau of the Southern Nations, Nationalities and Peoples’ Region to bring much-needed cervical cancer prevention services to women. Initially launched in Wonsho district in September of 2014, the program has screened 694 women and treated 74 women who were identified with early signs of cancer. In 2015, GFH plans to expand to four additional coffee growing districts in Sidama: Aleta Wondo, Dale, Shebedino and Dara. Funding for clinical training of local health professionals, medical equipment, and an initial community health promoter (CHP) training has been secured with support from North American coffee roasters participating in the East Vs. West Roaster’s Challenge. Additional funding from Java Jog would be used to directly benefit 1,200 women from the Telamo coffee cooperative, a primary co-op of SCFCU in Shebedino District of Sidama zone.

Specific activities would include a stakeholder meeting with community partners, a CHP training, and screen-and-treat campaign for women associated with Telamo co-op. A grant of $10,000 would provide screening and treatment, when necessary, to approximately 400 women in addition to training for 30 CHPs. A grant of $20,000 would expand the program exponentially; reaching approximately 1,200 women with direct services and training 60 CHPs, in addition to covering the cost of a cold coagulator, a device for treating precancer. A cold coagulator would be a major asset to the program with lasting benefits: compared to the current method of treatment, cold coagulation is faster, easier to maintain, has fewer recurring costs, and is easily transported. With a cold coagulator, GFH would be able to initiate mobile services, making preventive treatment accessible for thousands more women in Sidama.